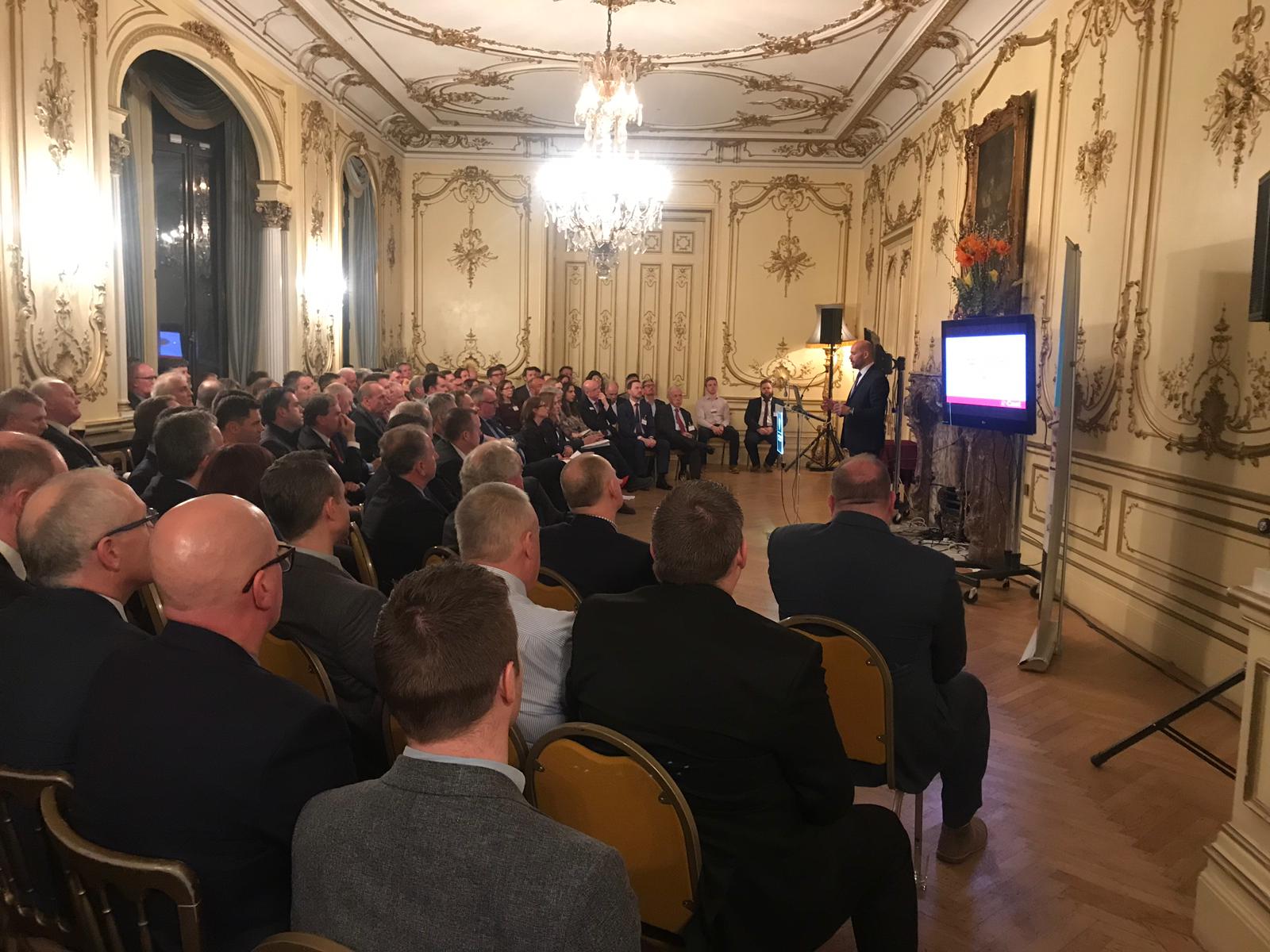 Time is running out for traditional practices in the construction industry

A leading figure in construction has set out his vision for modernisation of the industry. Speaking at an Enterprise Ireland event at the Embassy of Ireland in London, Mark Farmer, CEO of Cast Consultancy said ‘the platform is on fire’ and warned that complacency is not an option for construction firms that want to survive.

In his keynote address at the event hosted by Enterprise Ireland in association with the Constructing Excellence London and Cambridge-Oxford Clubs, Farmer, author of the UK Government Review of the Construction Labour Market Model in 2016 ‘Modernise or Die’ said the industry was still beset by outdated practices and an inability to address external factors it can’t control. An ‘unholy trinity’ of trends with the potential for a serious crisis in the industry – an ageing workforce, a lack of attraction for new entrants, and geopolitical factors like Brexit – posed a serious threat to the industry.

“We’ve had lots of clarion calls for change in the last 30, 40, 50 years but we’ve, never really had an alignment of these three things,” he said. “More people will be projected to retire from the industry than enter it; the prospect of tariffs and diminishing free movement of labour; and in London around  25 per cent of workers are from EU countries, with up to 70-80 per cent of EU workers on some building sites. The young people of today do not see construction as an aspirational career – they see it as dirty and low tech.”

An insufficiency of qualified personnel now besets the industry “from boardroom to building site” but, Farmer said, recruitment is not the whole solution. “The structural decline in our workforce, both in terms of headcount and competency, at all levels, remains for me the biggest single cause of the growing sense of crisis. But it’s not just about throwing more people at the problem, it’s about changing the entire labour model.”

Farmer also drew attention to the radical changes underway in other sectors, most notably automotive and manufacturing generally. With digital technology, machine learning and blockchain now becoming the norm in everything from design, to build and quality assurance, traditional ‘Tier One’ suppliers in construction will find radical ‘disruptors’ challenging from other sectors and from construction start-ups. Professional roles will also become redundant and entirely new skillsets will replace them. He went on to discuss the adoption of Building Information Modelling (BIM) as a digital tool for planning and building in the industry, but said that too often it didn’t translate into efficient building on the site. “The bottom line here continues to be that we need to design differently, procure differently and build differently,” he said.

Speaking after the event, Farmer conceded that since the publication of his 2016 report ‘Modernise or Die’, UK and Irish government policy makers and industry heads had started discussions, but concrete change remained elusive for many.

“I think the industry has woken up,” he said. “Everyone is on the same page with the resourcing crisis around skills. Industry and government are recognising that we have a structural change in skills – that’s creating debate which is necessary for change.

“Although we’re out of the phoney war of people thinking we might not have to change…the issue is that some people are struggling to understand how they change and modernise. In particular, how they do that in challenging times in terms of the economy.”

The event was hosted by Enterprise Ireland, the Irish government’s trade and innovation agency.

“Ireland has long been known for its expertise in the construction industry, from the traditional building procedures to modern methods of construction and the use of technology that is now prevalent,” says Anne Corr, market advisor for the construction sector at Enterprise Ireland UK.

“As with any industry, construction companies need to innovate in order to deliver the best outcomes for their clients. Mark Farmer has a wealth of experience in the construction industry, and we were delighted for him to share his knowledge with our Irish and UK guests.”